Green Lanterns has really fallen off in my opinion. It is so hard to make it through an entire issue these days. The overall story isn’t even that bad, but the way the story is told, and the way the artwork portrays events is flat out stupid. I’m so over Simon Baz and Jessica Cruz too. Now that their personalities are fully developed, they are annoying people, and they are an annoying team. Again, I vote for this title to start following different Green Lanterns now, and give us a new writer. I don’t recommend this issue, it’s not very good. But again, it’s not a bad story. It’s just poorly told and poorly drawn. I have faith that this title can pick back up again, but my faith is small. Spoilers ahead.

Simon Baz and Jessica Cruz are called back out to Ungara to deal with some residual problems. Recall a few issues back, the Ungaran Commodore, Psyt, was murdered and DNA evidence shows that the Molite refugees are to blame. We learn that as the Ungaran people violently protest in the streets, it provoked the Molites to take some of the younger Ugaranas hostage. It is the Green Lanterns job to go undercover and rescue the younglings without being seen. It’s important that they are not seen as Green Lanterns because everyone despises them and views them as the “bringers of death.” 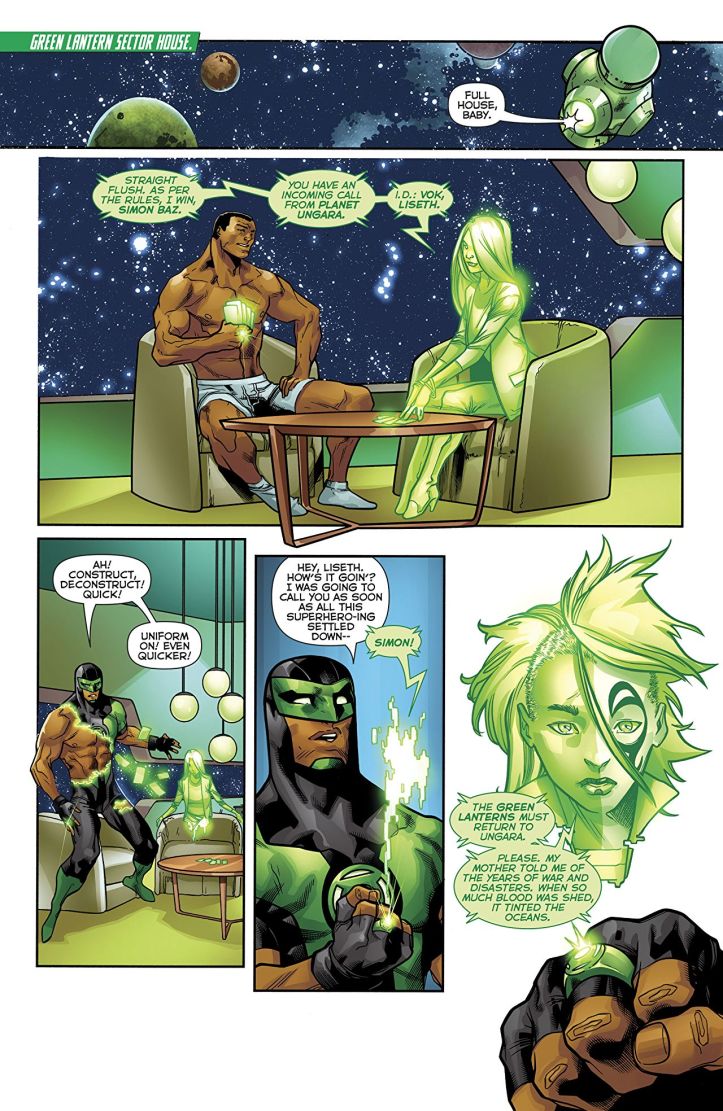 This part of the issue was not very believable, to put it lightly. Simon and Jessica have to go undercover as sanitation workers and enter the hostage location through the city’s moisture vents. So how do they disguise themselves? By using their rings to construct overalls to wear and a tool chest to carry as they walk through the vents. This “disguise” seems pretty idiotic to me. It’s like…. I’m really sure the glowing green overalls and glowing green ring won’t give you away or anything (sarcasm on my part). If that was the disguise they chose then they should have just went in in their uniforms. Then what happens? Oh, what do you know, the Molites see them and attack them, and they switch back into their uniforms. That was pointless. The Molites continue to attack them and Jessica constructs “baby Molites” with her ring that the Molites then pick up and hug. This distraction lets Simon and Jessica fly away to the next location. What the hell is happening with this title??

Everything gets resolved and Simon goes to bed with Liseth who is the Ungaran Regents daughter. Naughty, naughty… She tells Simon that the Molites didn’t kill Commodore Psyt and that they were framed. She says Kesh Cur killed him and that he is part of a supremacist organization called Red Tide. Then Liseth drops a bomb, she says “I am Red Tide.” We’ll have to find out what happens next time in “Pulled into the tide.”