The conclusion of “Twilight of the Guardians” starts with Ganthet and he is contemplating his end. He is stricken by the realization that even with the amassed knowledge over the eons of his existence, he is still ignorant of what it means to be called father. He feels an desolation, a longing for an end that does not come soon. This was a nice piece to the story. It is a simple touch yet it really created a bit more depth to Ganthet as a character. It makes me think of him in a human way, which is much different than how his character is usually portrayed. I’m rooting for a Ganthet/Sayd son or daughter. I hope it happens!

Just then Hal Jordan, John Stewart, Kyle Rayner, and Guy Gardner bust through the roof. This scene in the book is amazing and refreshes my love for Green Lantern. The four of them ambush the Controllers, each with their own iconic ring constructs. Guy with his giant fists, Kyle with his intricate mechanized arms, John with his gun construct, and Hal straight blasting one of them in the face. Truly iconic of these four Green Lantern characters.

However awesome their entrance was, it will not be so easy for the four Lanterns. Kellic has an ability where he can project a vibrational frequency that will “churn their brains and insides to a pulp.” As the once Guardians, now turned Controllers, begin to harvest the rest of the Guardians, Kellic is free to finish off the Lanterns. 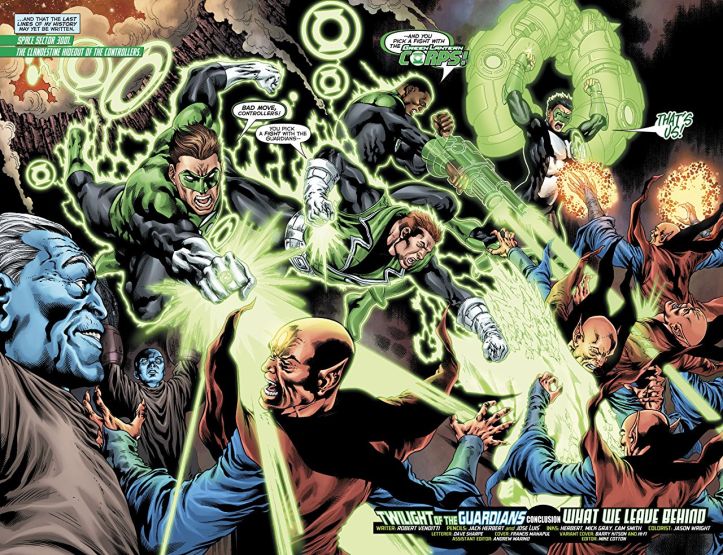 As Kellic has gained the upper hand, John creates a last ditch effort in which he constructs mirrors with his ring that Hal blasts into. Hal’s construct bounces off John’s and hits the computer system which is governing the harvest. This act frees the remaining Guardians from their captivity. Together the Green Lanterns and the Guardians overpower the Controllers. But the Controllers escape to fight another day.

With everything back to normal and our four Lanterns dismantling the Controllers base in Space Sector 3001, Ganthet brings the newly reunited Guardians to Mogo. On Mogo, Ganthet speaks of their legacy and what they can leave behind. In an awesome display, the Guardians don the classic red and white robes, with the Green Lantern logo on the chest. They are officially taking up their rightful spot as the Green Lanterns Governing council. This scene brought chills down my spine.

But the Controllers are still out there, plotting. They are in Space Sector 0001 on a barren world with a new legion of Darkstars! I must add, the Darkstar soldiers look really cool! I can’t wait to see what happens when these adversaries of the Guardians strike again!

I feel like every time I write a Hal Jordan Review, I just sit here and give Robert Venditti a thousand compliments. But seriously, how can a writer be this good? His stories, to me, are so captivating and interesting. They are well thought out and never get boring. Each character is written into the story in their own unique and classic ways. Additionally, seeing these four Lanterns interact and work with each other in the same book is a real treat. Jack Herbert also draws a killer book. All panels are really well done, and the splash page is beautiful. The colors are just what you expect in a Green Lantern comic; lots of bright greens. At the end of the issue, the way Herbert portrays the Darkstars is amazing! I cannot wait to see them in action! Next time we continue with a new run titled “Zod!”