The story begins on Apokolips, the home planet of Darkseid. A prophet is looking into the sky; he states that he sees “a vision” of Lex Luthor, and calls him the heir apparent. Apokolips is in chaos with no leader, no law, and without order. Meanwhile, Lex and Superman fight crime back in Metropolis. Clark, Lois, and Jonathan also spend time together as a family before being captured and transported to Apokolips. This story sets the groundwork for a larger story that pits Lex Luther, as king of Apokolips, against Superman and his family. 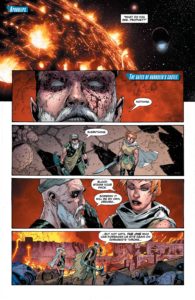 The story transitions from Apokolips to Metropolis where Lex and Superman respond to an emergency in Metropolis. Despite their teamwork, Lex Luthor wants to be the hero of earth. The duo stops a group of robbers dressed as superheroes and call themselves the Justice League of armed robbery. They have a gentleman’s discussion about who will do the honors before taking them out. Superman and Lex worked together to defeat crime. However, Lex’s internal monologue reveals his true motives as he flies back to his tower. Lex thinks, “the people’s love for me continues to grow, one of their own, their guardian born on the same planet.” The statement builds suspense given Lex’s recent claims to be the earth’s only true hero and given his history of opposing Superman.

The story continues as the prophet and a woman, from the opening panels of the book, capture Lex Luthor. They tell Lex, “Your throne awaits.” And, “We’ve missed you god of Apokolips”. For those who are unfamiliar with the Darkseid Wars, Lex gets all the powers of a god in that storyline. The connection of this story to the New 52 will excite some and dissuade others. Those readers who appreciate continuity could see the connection to the Darkseid Wars as an affirmation of the New 52 story. However, many readers will despise a possible affirmation of a New 52 story in Rebirth.

Back in Metropolis, Clark, Lois, and Jonathan go out as a family. Lex sends a message to Superman, which Jonathan also hears, telling him to meet Lex at his tower. Clark ignores the message, brushing it off as not important. The story reunites the reader with the family-oriented Superman story that has been the strength of this book since rebirth. 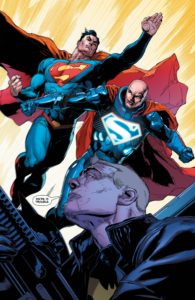 The family outing doesn’t last long, Lex’s  Lexbots meet Clark and his family while they are walking in a park. The Lexbots present Superman with an ultimatum, “Respond to my signal and help me with a personal situation, yes or no.” Superman says, “No,” because he cannot leave Metropolis unguarded. Superman and Superboy make quick work of the older model Lexbots. However, A mother box appears as Superman and Superboy debrief. This Lexcorp trap captures them transporting the whole family to Apokolips! This issue is low on exposition and heavy on art, which is a refreshing departure from recent books. Given the recent Action Comics and previous Superman story arc, it’s nice to see an old-fashioned superhero story that is not bathed in current events. The story leaves the family on Apokolips with the fear the Lex Luthor is their ruler!