One night as she’s still at work, obsessing over the root of it all, what seems to be an artificially intelligent system awakens in the depths of a computer system in the Metropolis Transit Authority Engineering Office. It manifests itself in the form of some black electric cloud and consumes one of the engineers. Now that it has inhabited a body, it can move through the material world. It now has an identity and it calls itself, Midnight. Its target is Lana Lang.

Lois Lane pays a visit to Lana’s home where she resides with her boyfriend Henry Irons (Steel). Lana isn’t home and hasn’t been in a while. As Lois is there our new villain, Midnight, comes crashing through the window. Irons quickly dons his Steel armor and gets Lois to safety as he gets consumed by Midnight.

Meanwhile….Lana, Maxima, Natasha, and Natasha’s girlfriend Traci are at Steelworks trying to figure out these random unexplained anomalies throughout Metropolis. After some incredibly cheesy talk about them possibly being mini black holes, more talk about energy not being able to get destroyed only transferred, and some other talk that you can tell the writer has no real knowledge about, Lois comes to the door bloodied up and asking for help. The issue ends here and we’ll have to wait until next time to see what happens. 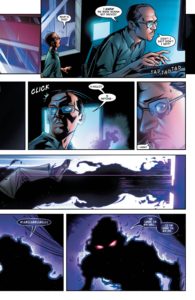 The art is fantastic as usual for this title. Sami Basri’s artwork is wonderful to look at, admire, and is all around great comic art. This issue, however, has some super feministic undertones and seems to try way too hard to make women look amazing and men look worthless. I am all for girl power, and I love a strong female in my comics but this seems to be a little over the top. There are only two men in this whole issue, one of them being Steel. One guy gets jacked by Midnight, and the other guy, Steel, who is portrayed as weak doesn’t know how to fight back, so he just runs until Midnight jacks him too. Let me also throw in there that Midnight has female traits and a female look. All of the women are portrayed as hard working, intelligent, and tolerant hero types working hard to solve “major issues.” Did you see the newest Ghostbusters movie? The one with the all female cast of Ghostbusters, and every man in the movie was a total bufoon but all the women were awesome and smart? Yeah that was a lot like this issue except instead of making the men look like bufoons, they were made to look helpless and weak. So let me guess….the next issue is going to have all the girls figure out this Midnight character and they overpower it and save the day? There I just saved you the hassle of reading it. How original.

Superwoman is usually a fun read. It’s not a title that I take very seriously as the stories are very mediocre and typically irrelevant to anything happening in the mainstream titles. The artwork is commonly fantastic and enjoyable to admire. However, it really gets under my skin when I feel like writers are trying to push a political agenda. I feel like I’m seeing this more and more nowadays with DC and it makes me feel worried about the future of our comics. I am not speaking to whether I agree or disagree with anything. That is not the case. Even if I 100% agree with your political opinion I still don’t want to hear it. Keep that stuff out of our comics. Our comics are not here to persuade people into thinking a certain way. They’re here to give us stories of heroism, justice, and honor through a degree of magical tones and otherworldly facets. If I could beg DC to force their writers to stop slipping in hidden messages of political ideals and safe spaces I would. But there is no way I can do so in a way that they would listen. All I can do is stop reading a title if I feel like it is getting too out of hand. Skip this issue and this entire run as this was only part one.