The JLA is still trying to find Ray Palmer in the Microverse all the while trying to save beings that live on the surface of a Moz-Ga from an outbreak of quantum storms. 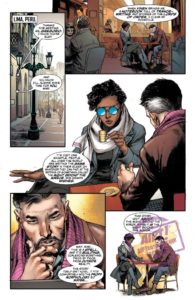 The story opens with Vixen having a meeting with a man named Gregorio in Lima, Peru about a trance writing on The Lords of Order. In the conversation the Might beyond the Mirror is brought up and its revealed that it grants wishes. Gregorio says thats its actually a spell and its building, setting the scene up for possibly something big in later issues.

We cut to the Microverse and we find the team of Lobo, Killer Frost, Batman, and Dr. Aut trying to stop or at least at this point calm down a riot of the natives of the surface of the planet Moz-Ga caused by an outbreak of quantum storms. I have no idea what quantum storms all but they look nasty. Oh and did I mention Lobo is doing all this while swinging around his severed right arm (not that anyone is really shocked by Lobo doing this I mean c’mon he’s the Main Man).

Meanwhile deep within the core of Moz-Ga we find young Ryan Choi still trying to find Ray Palmer, but while the new Atom is doing this Batman and the rest of the team has the Null Army to deal with on top of the riot and the quantum storms. Capes just can’t catch a break.

Ryan attempts to talk to Moz-Ga to help stop the quantum storms but he approches Moz-Ga as a peer not as some higher being and in this Moz-Ga responds. Ryan thinks all will be ok now that Moz-Ga is on the job but alas this is not to be. Moz-Ga tells Ryan that healing the microverse is beyond even him but he can help Ryan with something else..find Ray Palmer.

We cut back to the battle and some Null soldier has made the mistake of making Killer Frost angry, and she shows him the reason why there is the word killer in her name by freezing him to death. Lobo and Batman continue to fight as well but then out of nowhere a ship appears and who is the pilot, none other than Ryan Choi. Batman then arms a Batarang witha electromagnetic burst and Ryan uses the ship to help spread the burst all over the Null Army  and they are defeated (Hoooray, Huzzah, yippie).

The team leaves to find the ignition point of the quantum storms as well as Ray Palmer. They come to another part of the microverse where on it they find none other than (wait for it) Ray Palmer, but to everyone’s surprise Ray does not greet them with warm welcomes rather he shouts that Dr. Aut should be there and that Aut will doom them all (cue dramatic music dum dum duuuuuum).

This story is very good in that it kept me guessing what would happen next and it didn’t get off topic. Even the opening scene ties in cause you know as well as I do that what Vixen and Gregorio was talking about is gonna come back. I love the action scenes especially with Lobo fighting with one arm, I mean c’mon that’s just plain cool. My favorite thing about this story is how Ryan comes into his own finally and finds his self confidence. The art is well done and fits the story very very well, Its not to gritty or dark or even too light for that matter its just right.