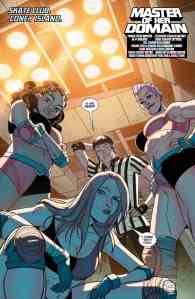 We got ourselves a fill-in issue! When we last left Harley, she had announced her intentions to run for Mayor or New York City. Those plans take a backseat as we get treated to Harley picking a fight with the Penguin. What ensues is a solid issue that has plenty of laughs and shows Harley has a soft side when it comes to hipsters, freaks, and hookers.

The issue starts with Harley getting a little too aggressive at a roller derby match. After she goes to hit the showers, she learns that people at Coney Island are at risk of losing their homes and businesses due to an eminent domain warning from the government. Apparently, the Penguin has plans to turn Coney Island into another one of his casinos. Harley and Cobblepot don’t exactly have the best of friendships, so Harley decides to pay him a visit.

After Harley “persuades” Penguin to give up his plans, she assumes she has him beat. But Cobblepot has an ace up his sleeve. Or perhaps we should say he has two giant mutant penguins up his sleeve. And we mean literal penguins, not two huge versions of Cobblepot. The mutant penguins wreak havoc all over Coney Island. I have to be honest, it made me laugh out loud to see two comically buff penguins causing all sorts of destruction. Whoever had the mutant penguin idea deserves a raise.

Harley decides to pay the Penguin one last visit, only this time she has some company: the Joker. Or, at least, a hologram projection of the Joker, but we don’t figure that out until the Penguin decides to give up his plans on opening up another casino.

Finally, the last page of the issue gets full-on meta. Harley calls up Amanda Conner and Palmiotti to figure out just what’s going on for this weird issue. Apparently, Conner and  Palmiotti just needed a little breather between issues, so they threw in this fill-in issue. At least Harley takes some satisfaction from the knowledge neither one of them is getting any royalties from this. 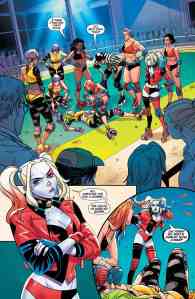 This issue is exactly what I want out of Harley Quinn: insanity and fun. Although Harley is most often an anti-hero, in this issue we pretty much see her as a straight-up hero. Sure, she’s not above using lobster claws to threaten the Penguin’s crotch, but we get to see her use her ingenuity in utilizing the Joker hologram to threaten Penguin.

This fill-in issue is a welcome breath of fresh air before we enter what is sure to be a tumultuous election for Harley. With the title of the next issue being “Vote Harley!” we will soon see Harley take on the man. Maybe we’ll get some insightful political commentary out of the story arc, too!