“Heart of the Amazon” beats on in this, the fourth part of the story. For the most part this arc has only gotten better with each issue and even though writer Shea Fontana had the unenviable task of following a beloved Wonder Woman series by Greg Rucka, she has had fun with the character. Fontana continues the action packed Diana tale with another good issue at #29.

‘HEART OF THE AMAZON’ part four! No single bounty hunter would be enough to draw blood from Wonder Woman-which is why the cabal that’s so desperate to get their hands on Amazon DNA has sent five! 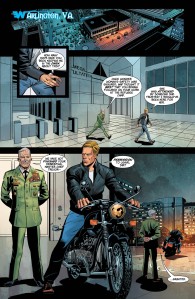 Steve Trevor is back (drawn suspiciously like Chris Pine?) and hurriedly chases after Diana after learning of her recent troubles. Cut quickly to Diana and Etta fighting costumed bounty hunters. This action sequence is drawn well and includes plenty of dialog to move the plot along. We learn more about the motivations behind the attacks on Di as asses get kicked. Trevor arrives as the fight ends and we jump ahead to the gang getting some very fast answers about the whole mess. The quick pacing leaves a little to be desired as we just have to assume a lot of the government characters just know what they’re doing and their fancy tech finds answers lightning fast.

It all boils down to Diana’s perfect, wonderful, and amazing Amazon DNA. A filthy rich disease researcher believes Wonder Woman is the cure for cancer, etc. Madness! The conclusion of this issue is not that surprising, but I won’t spell it out. I will say it is VERY obvious as conspiracies at high levels usually all go back to one usual source. The interesting part of this issue is the emotional struggle Diana goes through on her own. She is wrestling with her mission and duty to truly help humanity. I found the writing of Wonder Woman’s thoughts and a short flashback to her childhood to be well-done as the action was dialed back and more room was given to the story in the latter half of the story.

WELL, there it is…Wonder Woman #29 is a conspiracy theory wrapped in a superpowered goddess. My chief complaint is with the “almost too easy” bit of plotting out a massive conspiracy. The art is probably the best out of this story’s arc thus far. I loved the fight scenes and character interactions. Colors and lines remain consistent from page to page and didn’t distract like they have in some parts of previous issues. Overall, however, I’m on board and happy to find out where this desperate need for Amazon DNA concludes.