THE TRUTH SPEAKS
Aleš Kot and André Lima Araújo continue to impress me with this technofable/superpower hybrid. This follow-up to an intriguing first issue elevates this series to my must-read stack.

In the jungle, the mighty jungle, The Truth reviews toniiiiight.  Public Service Announcement time:  Dogs love llama shit.  I mean, they love it.  No doubt, they’re coprophilic by nature, but there is something special about llama feces. 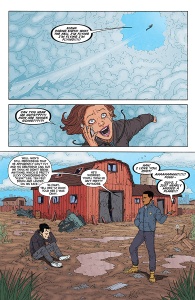 The big reveal at the end of issue #1 was that Mr. Akio’s Project Utopia code was released on Nick, Elena, and Baldwin.  The code on their screens caused black liquid/blood/goo to poor from their cavities and appeared to kill them, until they rose, awakened with new powers.  It was a gorgeous and gory scene

Elena discovers she has the power of flight, and now she is testing it out, flying around like a madwoman.  On the ground, Nick discovered that he does not feel pain or get hurt when he falls attempting to fly.  Baldwin is not sure what his power is yet, but he has noticed his vision is a bit wonky.

As Akio explains why he has done this and ruined his career, we see Elena flying as close to the sun as she can, and she seems to get pretty close, burning her clothes off in the process.  Akio has done it because of all the red tape.  He deals in evolution. The general deals in war.  He has made a perfect war machine.

Akio says the children are weak and need training, and will use the technology to help the general’s daughter if he allows him to go to them.  They talk of their losses, the general lost his wife in the wreck that took his daughter’s legs, and Akio lost his children in an earthquake.

The gang is trying to decide what to do.  These powers are cool, but they’re worried about who gave it to them, what they can do, and what they want with them.  They also don’t have the cash they were going to get, the cash to help Elena’s mom.  She can’t run.

They decide to stay, but suddenly Aiko sends them all a warning message:  Run, the army is coming.

They try to make it home, but public transport is shut down, and they get caught in a protest.   This starts an argument between them, seems Elena’s affections might be a sore point here.  Next thing you know, the riot police move in, and all hell breaks loose.  In the chaos, we see Nick attack a policeman on news footage, then Elena taking to the skies!

In the final frame, Aiko makes a pronouncement that could have chilling implications.  Have his true motivations been revealed?

I love the way this is coming together. Tension is brewing in the gang. three is company after all. Shades of Patrona in Nick’s attitude towards their new powers. Looking forward to #3, this series is Truth Approved!

I’m going to go ahead and say it…I’m not good at the Twitter.  I’m really not a worthwhile follow on there. @popntruth but it’s mostly retweets. My Instagram, however, has moments of greatness, especially my Stories.  The feed itself is still mostly dogs.  But in the next few months, you’ll see Robert Kelly, Maria Bamford, and Joey Diaz!  @underthedogs

THE TRUTH HAS SPOKEN