It’s a bloody good time in the newest issue of Harley Quinn. In the previous issue, we see the Unconquerable 25 get fired to take out Harley Quinn. The team ends up ambushing a little shindig Quinn put together, and she doesn’t take the interruption well. This issue picks up where the last one left off, and we see the utter brutality Quinn inflicts upon numerous people. 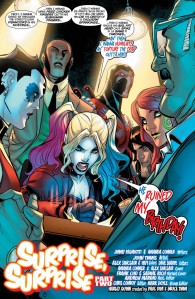 The issue starts with Quinn and the gang after the big fight. They’re bruised, but clearly, Harley Quinn has survived the encounter, as if that was ever a question. The rest of the issue cuts back and forth between the big fight and the aftermath, and it ends with an intriguing set up for what the readers can expect going forward.

Note: This review contains spoilers, so read ahead at your own risk.

The driving force behind this issue is seeing the complete mayhem that ensues with Harley Quinn, Catwoman, and Poison Ivy fighting the Unconquerable 25. The fighting is brutally drawn. The issue definitely earns its T+ rating at certain points. I’m going to be honest: I read this issue a few days ago, and the panel of Harley using one of the Unconquerable 25 members as a human shield who then gets riddled with bullets is still seared into my memory. Everything from the bullets hitting the body to the person’s face becoming inexplicably sunken in is drawn to perfection and leaves an impression.

My favorite point of the issue is when Harley Quinn uses a cannoli to scare a helicopter pilot into taking the vessel down. Quinn goes into a long spiel, stating:

In eight seconds, the delicious flaky pastry will fuse with the chemical makeup a’ the helicopter glass. Then the fluffy white fillin’ will cause an inward explosion that’ll shread ya into a gazillion pieces.

I’ll be honest, I didn’t question any of that logic when first reading it. It only made the reveal later that Harley Quinn was obviously lying a few panels later all the funnier.

The action is great in this issue. The violence is well-drawn. The humor lands. And the issue ends on a great note.

After Harley learns it was the mayor’s right hand gal who put the hit out on her, she conspires with her compatriots. At the end, Harley announces that she is indeed going to run for mayor of New York City to get her revenge.

I 100% endorse Harley Quinn’s campaign. I’ve had my fill of violence for some time now, and I would love to see Harley genuinely putting on a mayoral campaign. It would be great to see some political satire, and I can’t wait to see what Harley does next.