With Jessica Cruz and Simon Baz stuck 10 billion years in the past, will they find a way back? Do they have what it takes to train the ancient Green Lanterns and unite them to stop Volthoom? Find out this week in Green Lanterns #29. Spoilers ahead.

We pick up where we left off 10 billion years ago as a struggling Cruz tries to maintain order among our ancient Lanterns. Right off the bat she rescues Baz from an over-combative Tyran’r. As we see the various characters in their training, Sam Humphries does a great job in portraying and developing the mindset of each one as they tussle with their own circumstances. Cruz struggles to maintain leadership amongst the group, Simon is frustrated at not having a ring anymore and feels helpless as he’s disconnected from the reality he once knew, and the ancient Lanterns each have their own individual obstructions in controlling their power rings. The dynamic of each character is well thought out and real, both individually and while interacting with each other. Each character eventually gains the ability to control their rings to a certain extent, but they all expect to simply go home and resume their lives. This brings about a “what the hell” kind of moment for Cruz and Baz and they have to convince the ancients to assist in defeating Volthoom.

As Baz is slowly starting to lose his mind in anger and frustration, Z’kran Z’rann tells him that he bears the mark of anger but has the ability to overcome it. This encourages Baz to calm down and focus his willpower into the shards of his previously shattered ring in his arm. The shards begin to glow emerald green as well as his body and eyes, and in a triumphant moment of awakening he gains the ability of Emerald Sight. This is a rare power which allows Green Lanterns to catch glimpses of the near future. Which is exactly what happens. He sees Volthoom reigning terror on the planet Zoron in a desperate attempt to lure out the Guardians and get back his Travel Lantern. Though Baz does not fully have his Green Lantern powers back, this is definitely a cool start. 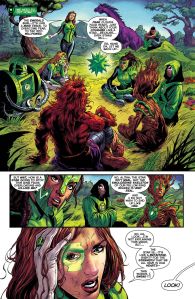 After a desperate pep talk to receive the help of the ancient Lanterns, they all rush to save Zoron. But it’s too late. The whole planet is blown away. There is only rubble and dead bodies where the planet once sat. What does this mean for our heroes? Is it too late? Will Volthoom forever shape history changing everything we know and love in the DC universe? Where are Cruz and Baz going to go from here? My guess is they will seek out the guardians. But we’ll have to find out next time in “Out of Time: Part Four.”

Let me start by saying that I really like the cover of this issue. The characters are all drawn very well and the green and purple colors together are pleasing to look at. Walker, Hennessy, and Wright did a fantastic job on it. However, one thing I can’t figure out is why Jan-Al of Krypton is on the cover. She looks like she’s about to kick some ass with the rest of the group. But as we saw in issue #28, she’s dead. She fried herself with her power ring. So what gives? Is she going to come back somehow? Maybe Cruz figures out the piece of Travel Lantern in her ring and uses it to go back in time to rescue her? Just a thought, it doesn’t happen in this issue. Jan-Al has no part. Why has there been so much emphasis on her when her involvement was so minor?

Humphries tells an amazing story. The dialogue between characters is real and relatable. We all have our struggles in life when learning new things and Humphries portrays that individually in each character, each with their own reaction and in their own way. Humphries has been rocking this story with a very logical flow, without rushing the story and without moving too slow. The artwork is also phenomenal. The precision and attention to detail in every panel of this issue is tremendous. It’s bright, colorful, and all around exceptional to look at. This is a great team that is on a great run right now. Include this issue in your pull for this week!