With this series, it’s proving to be philosophical, pretentious, powerful and to a certain extent, maybe even political. There are no spoilers in this review, and since my last review was quite a success – (so thank you to those that took the time to read it, feedback about it and most of all enjoyed it!), I shall be keeping this short and sweet.

‘UNDERWORLD’ part three! Aquaman lives! Threatened by the return of Atlantis’ natural-born ruler, King Rath accelerates his plan to scrub the sunken city of all its ancient magical treasures-but why is he stockpiling magic? Whatever the reason, Rath will need all the firepower he can get when Mera breaks through the barrier surrounding the city!

So with this issue in the series, as I’ve mentioned I found it to be philosophical, pretentious and also empowering. The reason for this is that very early on in the series, we find a series of characters becoming a little more invasive to the Old King, and the whole dialogue to me reads quite political. As mentioned from #26, we are definitely in the depths of something major here, and that you have to forgive the slightly toned down read.

Very early on in the series, you can clearly see that the artwork in this may require some fundamental taste. For instance, I value the hand eye coordination, the old school method to how buildings look, how environments are placed together, the puddles, the clouds, people’s expressions. Unfortunately for me, this series seems to come across as a lot of tech work involved, as most of the faces of those we concentrate on most have been given very little detail. In my opinion, it’s a bit ‘Disneyfied’ in its approach. Now, don’t get me wrong, some love it, some dislike it – but I feel with dialogue a bit, dull and drawn out in some places. The artwork is what really needs to drive this up, but for me – it didn’t quite satisfy my thirst for more Aquaman.

Recently we have seen a sneak peek look at onset costume for Jason Momoa (Aquaman) and company. Truthfully it’s not as well reflected in this series of the comic, as one would have hoped. I’m not saying let’s give him fluorescent orange scales and dark green bottoms. But the shapes don’t feel sharp, edgy, muscley enough – and I feel that’s mainly the pc taking out some of the finer details that sometimes we under appreciate.

Don’t get me wrong, this series is not all doom and gloom. There are elements to this in which the pc maybe does it better than Stan Lee! From the outset, the first scene is Aquaman awakening, and the vibes really give off for it. A slight blurred disgruntled distortion – something I feel most artists would maybe struggle with portraying. Credit where credit is due, it seems as though the creatures in this series have been given a lot of detail. 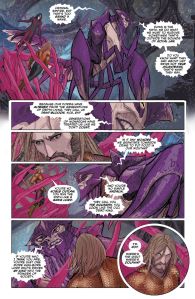 I think after looking through Stjepan Sejic’s previous work, in my opinion, he favours environments and creatures where details don’t have to be so symmetrical or pin point accurate. The environments are dark, gloomy but easy on the eye. The vibrant colours set the scene nicely, from sitting beside Mera in Manhattan to facing Krush in the back streets of nowhere.

Overall, I still stand by what I said before previously with other issues of Aquaman. In that, we are defiantly in the mix for something big. There was involvement with Titans and Justice League to support this, it won’t be a waste of your time reading. But I can’t say it will be at the forefront of your uber collection of ever growing graphic novels. You have to appreciate the back story of Aquaman. His abilities and how it’s really trying to cement its own unique place in DC like Suicide Squad has. Even though this may take time I can assure you I feel it will be well worth the wait. Hopefully, Jason’s film will back this up early 2018.