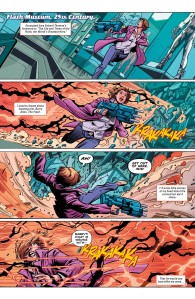 In this issue, the Flash is locked in a conflict with the Reverse Flash. Iris responds to the truth she learned about Barry. Barry ponders the change in his connection to the speed force. The Flash has changed, he is now connected to the negative speed force. The Reverse Flash achieves his goal, in part, to leave a lasting impact on the Flash’s life. He once wrote that the Flash was the world’s greatest hero. However, he ends this issue reveling in the lasting impact his negative actions would have on the Flash’s life. This book is about the impact that anger, hate, and envy have on the lives of Iris, Barry, and even Thawne. 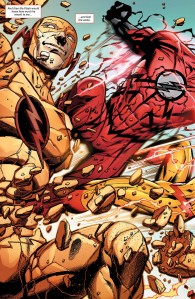 The Flash and Thawne are locked in a fight to the death, spanning across both time and space with Flash intent on killing the Reverse Flash.  When they wind up at the beginning of time the Reverse Flash mentions, not- coincidentally, that they’ve been here before. They’ve come full circle in their relationship. The Flash yells, “I’m going to kill you” revealing both his connection to the negative speed force and his hatred for Thawne. Reverse Flash states, “I like what you’ve become”. Barry’s fear that he couldn’t save the ones he loved and Thawne’s envy of Barry has devastated both of their lives.

Their reversal of roles is clearly demonstrated by Barry’s anger and desire to retaliate. “You’ve always been my biggest influence. I’m glad that I could return the favor”, states Reverse Flash. It has been Thawne’s goal to trap Barry in the negative speed force and eat away at his power. Barry mistakenly believes that if he kills Thawne he will be able to reverse the negative consequences of lying to Iris. 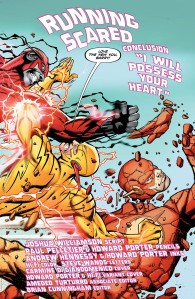 The masterful Williamson vividly describes the turn in Flash in limited dialogue allowing the art to show the impacts of his uncontrollable anger. The art reflects the impact Reverse Flash’s actions have as Barry exhibits the signs of his attachment to the negative speed force. Black and red replace the familiar gold and red. Barry’s face is almost a grey-purple, demonstrating his rage.

The story culminates in Flash removing Thawne of his connection to the speed force, therefore, robbing him of his speed. He confronts Thawne with all the evil he’s caused. However, victory is short-lived as Iris rebuffs his attempts for their relationship to go back to “normal.” Winning the fight and telling the truth have will not correct all of the consequences for telling lies. The lasting negative impact on Barry serves as a satisfying payoff for the reader. Not all repentant acts remove the consequences of negative choices from our past. 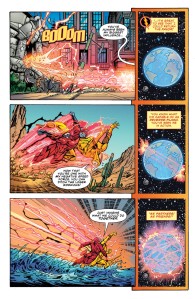 Thawne is a demonstration of how idolizing someone can lead to negative outcomes as will envy and jealousy. Iris shows how staying true to self sometimes necessitates a pulling away from close relationships as she asks Barry to leave. How long will these negative consequences last? What are the lasting impacts of Flash’s connection to the negative speed force? How much of Iris’ refusal to forgive Barry has to do with her fears about the future? What becomes of the children they have together?

Ultimately, the lessons learned by Barry Allen seem genuine and have lasting effects. Although he defeats Thawne he loses Iris and now has more in common with Thawne than he realizes. Barry is connected to the negative speed force and has acted out in anger and retaliation demonstrating a connection to the Reverse Flash emotionally.