Will our Bat Family overcome Ascalon’s zealot A.I.? Has Azrael joined the Dark Side? What is going on with all these Bruce and Zee flashbacks? Spoilers ahead. 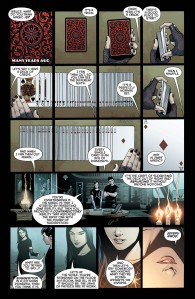 Detective Comics 961 this week is part 4 in Ghost in the Shell. It was mostly dialogue between characters as well as setting up for some for some big stuff. Tynion IV follows the same format as he has been, where we see Bruce and Zee years in the past talking about magic. She shows him the Gnosis Sphere and Zatara comes in and wipes Bruce’s memory. For some reason Zatara was concerned that Zee and Bruce touched the Sphere. Right after Bruce’s memory of the sphere is wiped we see Ras Al Ghul make a short and mysterious cameo. I’m intrigued. 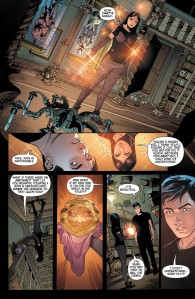 Cut to the future where Azrael is flipping out at Luke Fox’s lab. We see a pretty short and sweet fight, Batwoman and Cassandra vs Azrael. We now know that Ascalon is somehow embedded in Azrael’s head and plots to destroy all his friends for the sake of purging all sinners. So from what I can gather Azrael is still on our side, he’s just being manipulated. Luke figures out what’s up with the A.I. and why Rookie was the only bot to not get jacked by Ascalon. I’m not going to spoil this last part because it sent shivers down my spine, and I won’t take that away from you. But lets just say Luke has been building a new suit and wait until you see it. 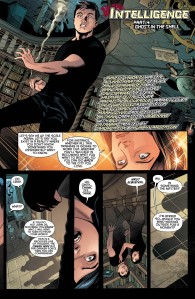 It’s going to be immune to Ascalon’s mind control and Azrael is about to become ridiculously awesome. Read this issue.

This was a great read. Slow to start, and little action. But that’s perfectly okay. Tynion IV is setting up some major stuff, and he’s not rushing it. The art is great, full of dark tones, but a very colorful fight scene. The last page is killer! All around, totally worth picking up.