The next Bat-chapter in the “The War of Jokes and Riddles” has arrived and it’s an INTERLUDE??!?! Writer Tom King’s Bat-opus is divisive with fans, to say the least, and this side story, “The Ballad of Kite Man, Part One” is unlikely to convert the disgruntled. I’m hanging on because for whatever twisted reason, I’m not hating this civil war…yet. 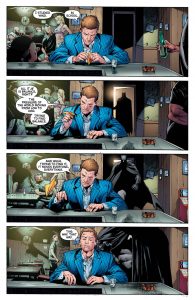 ‘THE WAR OF THE JOKES AND RIDDLES’ part three! The war has spread to every corner of Gotham City, and while Batman battles back the forces of Joker and Riddler, an unlikely criminal becomes the pivotal key to its potential resolution? but it could cost him everything.

If it was YOU who asked for a Kite Man origin story? Well, here ya go! This is a bit of a head-scratcher as the only connection I can make to the WAR is that Batman wants to use the soon to be Kite Man as a pawn to end the battle. Joker and Riddler mess with a poor schmuck, Charlie “Chuck” Brown, to the point where, after pushed to edge by tragedy, he makes himself a costumed freak alter ego? OK. Filler? Perhaps, but the story held a few minor charms and had some decent dialog. 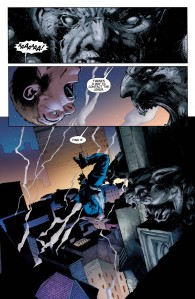 The pacing of the action in this issue, while creatively rendered (I loved the opening), actually messed with my first readings. Not sure if it is just my headspace or not, but it was a story that did not read well the first time, but actually improved over a second. I’m still not sure where the middle fight scene took place as it pops up a little too quickly, but the Joker’s “Charlie Brown” quote was fun. Perhaps the overall issue could have used some tightening.

Batman, again, is not the main character and, though the Bat-panels are drawn wonderfully, they do not tell us much about the overall “dark Bat-secret” Bruce Wayne is, I guess (lack of Bruce narration this time), still relating to Selina Kyle. 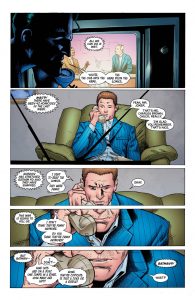 Artist Clay Mann does a pretty great job and should not be discounted, but Mikal Janin’s work on the previous issues helped sell me on the weaker aspects of the plotting. For me personally, Janin’s art is missed a little bit in this book. Mann’s Bat and Joker are very cool however.

In the end, it appears Kite Man will be featured heavily in the WOJAR. This origin of the Kite Man is to be continued, so I hope there is a pay off for this week’s story because otherwise, it’s not clear why the diversion takes place at all.