THE TRUTH SPEAKS
Oh my lordy lord, I’m feeling every one of these last 39.95 years I’ve been walking this earth, folks.  I’ve been slipping, telling LIES on the podcast, sleepwalking, and as previously revealed, farting like my teenage self.  It’s high time to re-implement the Real Ass Diet (copyright Luis J. Gomez).  You’re gonna see me buff out right in front of your eyes guys….it’s gonna be ehrmaaazing.

The crossovers keep on coming, we’re off to the west, the dusty desert, GOLD COUNTRY, as Jonah Hex and Yosemite Sam team up to save Sam’s claim from two faced varmints. Deadwood, this is not.  Oh yeah, and there’s a big ass mutant boxing rooster.  Let’s do this.

This book stands apart from the rest of the series but not in a postive way.  This feels like less of a passion project than the others.  Unfortunately it just did not hit the right notes for me.  The story here just did not make me care, it didn’t make me smile, and it just felt boilerplate.  It’s…it’s hard to put my finger on it actually.  Perhaps it’s the way Yosemite Sam comes across.  He’s got his mannerism, his ridiculous speech, but set in the more “real world” of Jonah Hex, it just doesn’t pan out.

Strangely, Sam is painted as basically a great guy, pretty much doing the right thing and just getting a little noisy sometimes.  In fact, he acts almost noble throughout.  Sharing gladly, does that sound like friggen Yosemite Sam? 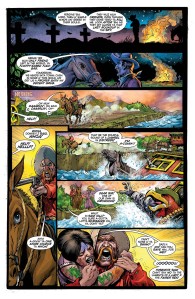 In short, Sam has a gold claim he is working, but his partners try to double cross him.  He comes across Foghorn Leghorn, the aforementioned mutant rooster, who is working for the circus, and saves his life.  Sam hires the legendary Jonah Hex to protect his claim, and Foghorn comes to warn them of a coming attack.

Again, this story just didn’t do much of anything for me, so I’ll spare you the blow by blows.

Art wise, for a western, I think it looks pretty good.  Jonah can’t help but get the lion’s share of detail, his half disfigured face demands your attention.   That, and the bountiful bosoms of the ladies working the watering hole.  It never ceases to amaze the advanced level of plastic surgery that was performed in the old west.  The book does feel a bit of a throwback.  Makes sense, is Hex even published anymore?  I should probably Google that.

In the end of the “realistic” portion of the book, I’m just left with an odd feeling.  Foghorn and Sam win the day and are the good guys.  Just don’t sit right with me partner.

Moving on the the Looney Tunes portion, I’m yawning.  This doesn’t get any better.  The art style is more Disney than Looney Tunes, the story just felt like it had very little thought put into it to make it pop, to make it obvious, This. Is. LOONEY TUNES!  Sorry to the team that worked on this, rest assured that at the end of the day, you are talented story tellers and artists, and I’m just a douche writing a review on the internet.  In other words, those who can, do, those who can’t, TRUTH!

If you are only going to pick up one or two of the crossover series, I advise you stay clear of this one.  Unless Jonah or Yosemite Sam was just your jammy jam growing up, in which case you’ll probably be just fine with it.

So yeah, a few more days of living like a scumbag, then a return to microbiotic smoothies low carb lifestyle, drinking water like a boss.

THE TRUTH HAS SPOKEN