This time we are on issue #6 “Wake Up”, we left off with ominous figures whispering Jesse name in the bushes while they slept soundly on #5. Who are those figures out in the darkness and are they the same things that took Arandano?

We come back to the woods of Maryland with figures in the distant bushes calling out to Jesse. Thinking they have her while she sleeps they sneak in. Surprise, surprise the gang will not be snuck up upon! With skirmish at their camp, Jesse is taken by a dragon?!  The other part of the group still out looking for brother Goat of which we still aren’t sure what has happened to. Except that they keep saying he was taken by a Dragon. Will we figure out if the Dragon is real? 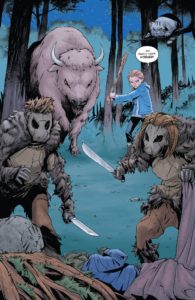 The twists of this story keep taking me by surprise, Marguerites writing really keeps you
in suspense with each issue. The art and coloring of these comics truly give you a feel for the important moments of the story line. Jesse’s memories having such a soft glowing feel to the art and then the harsh and gritty lines that come with the current timeline.

Just as we think things are settling in another twist and turn. Up until this point, Animosity has had a nice flow to it and it continues here. Leaving us with a hook at the end for next issue. Additionally, I look forward to going back and reading this as a trade so that I can really enjoy the continuous story line with the ebb and flow of story arcs and payoffs.