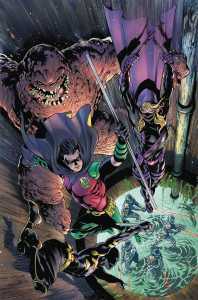 In Detective Comics #938 we get to see Colonel Kane and Kate’s early relationship fleshed out, really giving meaning and a driving factor for Colonel Kane. We can see that Kane is rigid in his beliefs, to the point of delusion giving us the gravitas for the ensuing fight. I have said it before, Tynion really has a feel for each of these characters and knows exactly how to write them and portray them.

In the following pages, we finally get the payoff of the character building that has been going on up until this point. With pages that are just crammed packed with action, from Clayface smashing some of the Batmen to Spoiler going full tilt in a room full of baddies. It’s an action packed joy ride of badassery, put simply this is what you want to see these characters do.

No one character here feels like they are the main character, each has a place and a moment in the story, it never feels like it is Batman and the other people. This is a testament to a well-written story with amazing art to back it up. I have found what transcendence feels like in a comic book.

As with every other issue, the art is great throughout, keeping pace and enhancing the story as it moves along. We get quite a few full page spreads that really shows off the skills of the art team in the book. Keep in mind they are delivering twice a month, simply baffling, the quality shines through.

Ultimately this story is leading into the Night of the Monster Men crossover between Batman, Nightwing, and Detective Comics. Normally I would be very afraid of crossovers as they never really go as planned. However, all of these books are so well done, that I am actually for once looking forward to the crossover to see what these teams can do together.